The last leg of our Transsib voyage was from Mongolia to the final destination, Beijing. We shared our compartment with Helena and Carla, two Swiss girls (yes, the Swiss again, they seem to do nothing but Transsib traveling) who just finished school and were taking a long vacation before going to university. Both didn’t seem sure about what to study, but also didn’t dare to view their trip as some part of self-discovery. Also on our wagon was a group of German tourists we met in the camp in the Steppe. On the next wagon, there were the Scandinavian we met on the rail from Moscow to Irkutsk. And somewhere else on the train we met Rahel and Andrea again, while also briefly running into other people we’ve seen somewhere on this trip so far. I guess once you are on the Transsib, you start to develop some kind of extended family there with all the people you meet here and there.

This time we were on a quite modern Mongolian train. It was even more comfortable than the Russian train and came with clean sheets, air conditioning and the most modern samovar we encountered so far (which was only presented by some faucets in the wall).

When they cross the border to China, they need to change the gears, since they use a different rail gauge in China (or as a matter of fact, they use a different rail gauge in the former Soviet states, while China is using standard gauge like most railways on Earth do). This process extended our stay at the border for a few hours in addition to customs. It was quite interesting to watch, but took endless time and you couldn’t leave the train. On top of it, they had to turn of the power in the wagons and you weren’t allowed to use the bathroom. Most people on the train slept, including our companions and later even Steffen, but once the gears were changed and you were allowed to leave the train at the next station, life returned to most of them. Either to get a chance to visit the bathroom at the train station or to grab a cold beer there.

On the next morning, the scenery had changed dramatically. When we went to sleep, there was only endless dry steppe outside. Now we were driving through green hills, mountains and even tunnels, which we have never seen on this trip so far.

Quite obviously we were in China now and the next part of our journey was about to begin.

On Saturday morning (not that we are really aware of weekdays during our trip) we left our home-stay early to get back to the Transsib. This time we had a Chinese train and it seemed to be older than us. Well, it just couldn’t keep up with the more modern Russian train we had before. It was quite a bit dirty (and they didn’t really try to change that, for example using a dry mob to clean the carpet isn’t really helpful), not as comfortable as the last train and smaller things just weren’t as good. But we were prepared for most things. like bringing our own toilet paper.

But we had a fun conductor, who was a main part of our entertainment. At the Russian emigration he made fun with us about the dead-serious customs officer. At the Mongolian immigration he handed us customs forms in Mongolian. At my request for an English form he just laughed. We are quite sure this was his way to make fun of us or keep us busy, since we got English forms from the Mongolian custom officers. But it really helped pass the time at the border. We had to work in a large group to figure out what they actually wanted to know from us. And during their checks he spent all the time to flirt with one Mongolian customs officer. Never give up, funny conductor man!

Well, the whole process from the Russian emigration to the Mongolian immigration took about four nightly hours and then we were on the rail again.

Our compartment companion for this stage was Fabienne. A nice swiss lady (not as old as that sounds), formerly working for the chocolate industry (taking care of sustainability and ecological impacts) and now traveling through Asia for a few months, but with having China as her eastern-most destination and traveling back to the western countries. It was her first trip on the Transsib, so we could tell her all the details in how the Russian train was much better (which became kind of a running gag between us).

Early in the morning we arrived in Ulaanbaatar and bid our farewell to the conductor. Fabianne on the other hand we would meet again in two days in the steppe.

[Images will have to follow, because the internet (or at least our connections) in Mongolia and China sucks!]

This post is a bit late. I wrote it partly on the train with my cellphone, partly in Irkutsk and now am finishing it in Ulaanbaatar.  I will need to catch up a bit.

We were on the Trans-Siberian Railway on our way from Moscow to Irkutsk. Being on a wagon of the second class, we got a somewhat comfy little compartment with four bunk beds and a broken TV. We shared our “room” with Jian, a Chinese student of computer sciences from Paris on his way back to Beijing. At the beginning the fourth bunk was occupied by Alexej, a vodka loving Russian (a pleonasm I know). He left on the afternoon after the first night, which improved the air in our compartment, but also took away some form of entertainment. Since Alexej only speaks Russian (and a hand full of German words) which none of us speaks, conversations were usually a guessing game. 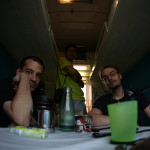 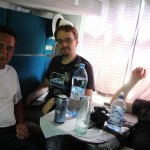 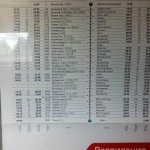 The other people on our wagon were mostly Scandinavian, who were on a big, organized tour. While they have the same stops like we do, we don’t share the same timetable, so we’ll part with everyone, including Jian, after arriving in Irkutsk (but should meet the Scandinavians again in Ulaanbaatar) They officially gave their support to the German football team, which is surely one of the reasons they won. Unfortunately we weren’t able to watch the game and our only connection to the internet was luck in finding an open Wifi at a train station or Steffen’s expensive data option. Neither Steffen or I are what you would call a sports fan, but we would’ve liked to witness the final game.

Biggest challenge on the Transsib is to kill boredom. While we were passing beautiful scenery (wide planes and a lot of evergreen and birch forests) and nice little towns, it got old quite fast. At least it’s a good way to catch up on some books, though. But Steffen was done with his two books half way to Irkutsk. I got an ebook reader, so I’m lucky to have more material, but am of course dependent on power. We had four power outlets on the wagon, unfortunately none of them in our compartment, but a bit away in the hallway. We also carry battery packs, but those are more for emergencies. But actually boredom isn’t really an issue if you got the right company and are prepared for long distance traveling. It’s just that you could be so much more productive with steady power and an internet connection. But then again you would miss all the fun of the ride itself. 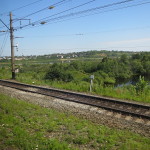 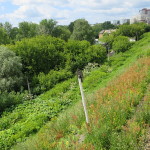 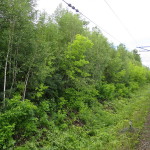 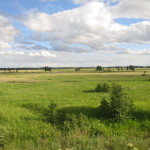 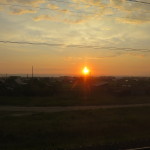 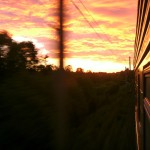 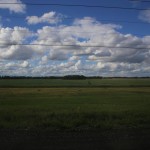 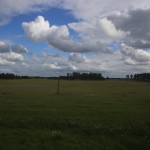 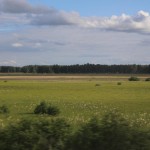 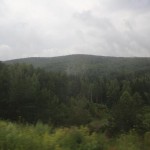 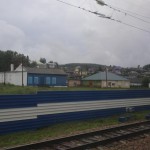 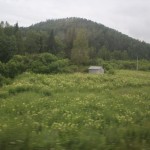 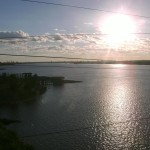 Every stop of the Transsib is a welcome break to walk round a bit, experience the outside of the train and hunt for Wifi. The later isn’t as easy as in Moscow, where you found free Wifi at every second corner. Actually, outside of the towns you often don’t even get a phone connection. 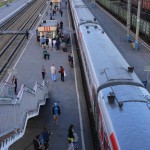 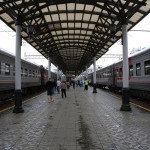 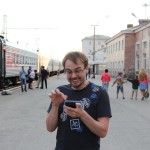 The train was actually quite good. When you think of the Transsib, you usually get the image of old well-used trains with a steaming samovar. This had a modern samovar, quite good banks/beds, an air-con and displays at each side of the hallway showing the next stop, the inside temperature and most importantly, if the restroom at that side of the hallway was in use or free. We got fresh sheets that came in plastic bags like you get your stuff on airplanes. The food in the dining car was good (but no caviar  for my pancakes), though, we mostly relied on snacks and something we could pour hot water over (our mothers would be so proud that we were cooking and eating well ). The crew spoke English good enough to get around and even a few word German. They cleaned the carpets every day and the restrooms all the time (you got the feeling they rush in to clean it, right after you leave). 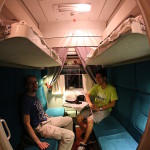 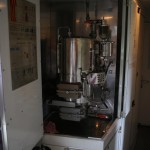 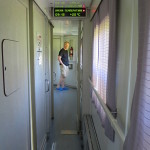 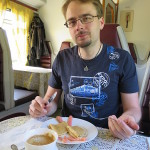 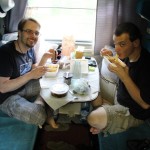 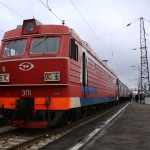 So all in all, the first ride on the Transsib was quite comfy. The only time where it got a bit stressful was for me, when I didn’t get back in time for the train to leave, so I had to jump onto a wagon at the end of the train. That one was behind the dining car, which was locked, so I had to convince the local conductor to let me through the wagon so I could get back to mine.

Just a quick update from the train station Perm 2 (no idea what happend  to #1).