Our day started with a walk in the park. Well, with the idea to have a walk in Gorky Park, but before we got there, we got sidetracked…

Ah, let’s make things short (this time for real): Headed out for Gorky Park, wanted to get a geocache before, saw the Monument of Peter the Great in the distance, went there, also discovered Muzeon Park of Art, took photos of many statues there, finally went to Gorky Park, enjoyed the time there, ate Shawarma, crossed the river, walked through urban Moscow back to Red Square, stopped at the Cathedral of Christ the Saviour, found other geocaches, bought T-shirts, got miss-led by metro signs, but arrived back at the hotel after using the correct station.

The whole day the sky was clouded, but it was okay, since it was said to clear up and let the sun shine through in the next hour… every hour.
(Insider für PH Kollegen: VNP-Stunde)

Tomorrow night we’ll board the Trans-Siberian for Irkutsk. So while we might try to post once more before we leave Moscow, don’t expect any updates for a few days.

Expecting bad weather, we wanted to do the outdoor part quickly and just headed to the Izmaylovsky Park, which is very close to our hotel. This is mostly a regular urban park, but has quite a few entertainment sites, ranging from simple playgrounds to performance stages. Music is played throughout the park, so all in all a fun, family friendly area. But shortly after getting that impression, we’ve been reminded, that we are in Russia at this little square.

But there are of course other impressions as well. 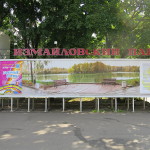 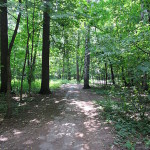 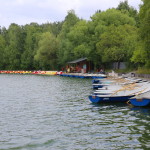 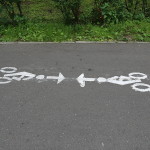 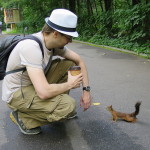 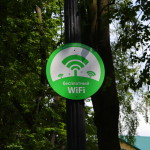 Seeing that the weather was still stable, we went into the other direction from our hotel and visited Kremlin in Izmailovo, which is part amusement park, but bigger part souvenir shopping area. They built a mock-up castle, that – if Russian architecture and fashion wasn’t actual so colorful and fancy – would seem like Disneyland. But since we are good tourists, we went there, took photos, bought souvenirs, ate at a Russian-Azerbaijani restaurant and enjoyed our stay. 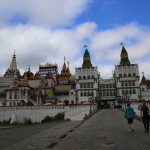 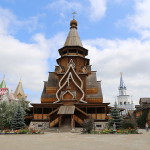 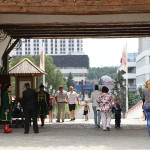 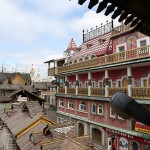 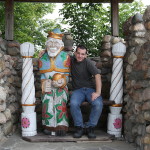 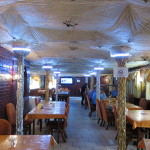 To end our activities for the day, we took the time to find the station from where we’re going to leave Moscow with the Transsib on Saturday.

And all day there was no rain. Hope that won’t get the better of us, like it did back in Hong Kong.

Oh and we stumbled across our daily Japanese surprise (which sadly didn’t have any Calpis). Looking forward to tomorrow. 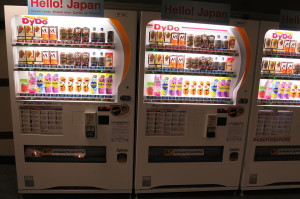 For our first day in Moscow we decided to tick of the most important station for tourists from our list: The Red Square

To get the educational part out of the way:

[…] The name Red Square does not originate from the pigment of the surrounding bricks (which, in fact, were whitewashed at certain times in history) nor from the link between the color red and communism. Rather, the name came about because the Russian word красная (krasnaya) can mean either “red” or “beautiful” […]. This word, with the meaning “beautiful”, was originally applied to Saint Basil’s Cathedral and was subsequently transferred to the nearby square. […]

(On the outermost sides is the Kremlin, then from left to right: The State Historical Museum, the Iverian Gate (the smaller red building), several less important smaller building, the GUM department store (the big non-red building) and – last but not least – Saint Basil’s Cathedral) 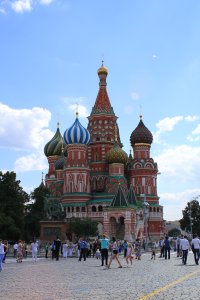 We entered the square through the Iberian Gate, which is already a worthy stop for tourists. Around the square are four main buildings or sites. The most eye-catching is Saint Basil’s Cathedral (see above), a beautiful church with colorful onion domes and most likely THE image people have in their minds when thinking of the Red Square. At the other end is the State Historical Museum, also a beautiful red building. On the long side to the south-west and south lies a huge site well – actually some kind of a citadel – with high walls and several palaces, churches, museums and lots of security: The Kremlin

We actually didn’t visit any of those buildings, yet. We’re expecting rain tomorrow and have that as one option to spend the time tomorrow. But we did visit the smaller Kazan Cathedral (haven’t seen that many pictures of saints in one place) and the place vis-à-vis of the Kremlin: The ГУМ (GUM)

The GUM is a department store or as we call them today, a mall. If you think mall, adjust your expectation to MALL. The place is frickin’ huge. If it wasn’t actually from the beginning of the 19th century , I’d say that this is what happened to Russia after they discovered capitalism. But it seems the aspect of consumerism is a bit older. In it’s high times it had about 1,200 (smaller) stores. Today the stores are larger, but 200 of them are still quite a lot. Well, to play the cheauvi card: The site was commisioned as a trade center by Empress Yekaterina Alexeevna (Catherine II; Catherine the Great), but I’m sure not all of them were shoe-makers.

We also walked around the area a bit, past a Duma (not the State-Duma as we know by now), the Bolshoi Theatre (and found our first Russian geocache there) and finally got something to eat at Planet Sushi, obviously a Japanese restaurant (but we didn’t dare to try the sushi and settled for rice with chicken/eel). Yeah, we can hear you. “You’ll visit Japan in a few weeks, why go for Japanese food already?” Well, we were confused, thanks to this sight: 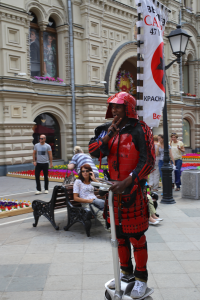 Early in the morning we left the Bottwartal for our voyage to Moscow. Getting to Stuttgart was the easy part, but Steffen already got a mail that our ICE trip was half-canceled (would’ve ended a few cities too early), so we had to rebook. That actually went well, aside maybe the tiny little fact that the other train was already 20 minutes late before it arrived in Stuttgart. En route, this ICE continued to delay its own schedule, but we managed to arrive at Frankfurt Airport in time to catch our flight.

Getting onto the plane wasn’t much of a problem… well, except for Steffen who enjoyed an intimate frisk at the security check. Turns out his shoes were the problem, probably a bio-hazard alert. The flight was okay, just a bit chaotic, since Aeroflot doesn’t seem to care much about their own carry-on baggage rules and not everyone was able to store their stuff in the compartments.

We arrived in Moscow without any further problems. And… we got into the country and out of the airport without any further problems (aside a bit lacking orientation due to the Cyrillic letters everywhere). We expected a more thorough check after all that hassle we had filling out our visa applications (during the prelude, so to speak), but no, they didn’t bother. We claimed our baggage, passed the green tunnel without a second glance, got cash from the ATM, found the shuttle train to Moscow… all way too easy and fishy.

But it hit us after that. Understanding the metro system was above our tired heads in this muggy weather with 20-30 kg of luggage on our shoulders. We must’ve looked really confused and fortunately arose the mercy of a lovely young lady who spoke remarkably well English. She explained our route to the hotel and gave us valuable starters for the metro system, so we were able to head out and finally found our hotel.

More about the metro (war memorials everywhere) and our hotel (4 stars, 26th floor, not enough outlets) in the next few day.