Last day in Fukuoka: Time to wrap it up. Due to our laundry, we started a bit later for todays tour around Fukuoka. First destination was Fukuoka Tower, which unfortunately meant something we wanted to avoid for the rest of the trip: Bus rides. But hey, they’re not as bad as on Okinawa-hontō here. Sure, they are slow and have to go through all the traffic, but at least one can pay with plastic (smart cards) here. No more coin digging!

From the tower we got a nice view over the city – but I have to admit, it’s not up to the usual standards we’re used from those towers. Less interaction, information and (well, that might be a plus) souvenir shops. We even had to figure out the direction to Germany by ourselves. At least it was kind of a quick stop.

After exploring the area a bit (no, we did not unsuccessfully search caches), we went to the next item on our list, which is directly next to the tower: Robosquare. Sounds exciting and big, but is actually more of a shop that also displays some mostly modern robots. So we could browse through that quickly as well and fetch lunch. I have no idea what it really was, aside that it was a noodle dish with pork – so it resembled Okinawan style (supported by the music they were playing in the shop) –  but it wasn’t Okinawan Soba or anything else I could recognize. But who cares, it was tasty!

We wanted to get some more red bean soup (see yesterday) after that for dessert, but once we arrived at the shop, we were confronted with an empty counter. No desserts… life’s not fair (fwp, I know).

So in the end we were killing a lot of time (definitely not unsuccessfully searching for caches), since we had to wait for our dinner to get ready. Or to be more precise: For those who were supposed to serve said dinner to set up their shops. Along the river, a lot of small mobile shops (Yatai) are set up each evening serving all kinds of food and especially Ramen – which we ordered of course.

Oh, it started so good today, finding three caches in a row – but then our good luck was depleted. Well, either that or all caches that are close to a temple or shrine just don’t work for us. Maybe it has to do with this one particular cache owner, who placed most of them. Anyway, we did only find one more and that was it. 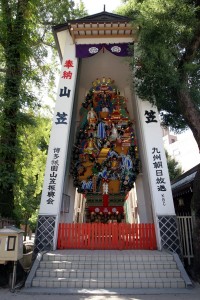 On the way we saw a few temples, shrines (even on the top of the train station) and some Kazariyama. There is a Shinto tradition, where they are parading portable shrines (called mikoshi) through the neighborhood of the temple. Something you might have seen on TV or in a magazine. The masterful decorated Kazariyama are kind of like that – just that they are not shrines, thus not carrying spirits, about 8 meters high, weigh a ton and were used for racing. I would’ve liked to see that. 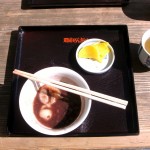 Of course, the caches led us to food as well (gotta love geocaching for that). We had some sweet red bean soup (zenzai) with ricecakes (genmai mochi) – so delicious. We also found the place for tomorrows dinner. (As you can see on the picture, the sun was so bright, that half of the soup evaporated before I could take the photo… true story!) If it weren’t for all the walking around, we’d return fat from Japan.

And just for the sake of completeness. Today was supposed to be a holiday: The Health and Sports Day (Taiiku no Hi). We didn’t notice anything about that. Most shops were open, no events were noticeable and some Japanese strangers we talked to didn’t know what we were talking about – except that it’s holiday and they get a day off.

Today we went to Nagasaki, which is a two hour trip on the train. On the ride to Nagasaki the train was quite full, had to stand the whole time and move for other people. The ride back was fortunately much less crowded and so we could take a seat.

In Nagasaki we walked straight to the Peace Park and the Atomic Bomb Museum – also a good way to get to know the city a bit. The park and museum were both informative and shocking/touching. We will post photos about that, but suggest you search the information about the bombing yourself.

On our last trip, we’ve already been to Hiroshima (but didn’t write a blog about it) and plan to go there again this year. In both cases it was shocking to see how the city got destroyed in a matter of seconds, but also how thriving they are again today. If you ever come to Japan, visit at least either of the cities.

Originally we also considered going to the O-Kunchi festival, but we spent so much time in the park and the museum, that it was already too late to search that festival and check it out. So we were looking for food – which was quite difficult, since about every shop we stumbled upon was either closed or didn’t fit our tastes (but mostly they were closed). In the end, we went to a restaurant at the train station where Steffen could have some curry-like Udon dish (he developed a sixth sense regarding curry) and I a cold Udon and Soba mix.

Today was time to say “Good Bye” to Okinawa (cue in Sarah Brightman & Andrea Bocelli) and “Hello Again” (cue in Howard Carpendale) to mainland Japan, because we flew back to Fukuoka (well, not really “back”, since we only transited through there on the trip from Seoul to Naha).

Because it was only a short (95 minutes) plane ride, it wasn’t as exhausting as the trip to Okinawa. Only annoying thing was that they wanted to do a full extra check on my carry-on baggage, so I had to unpack everything (notebook, camera equipment, hard disk, all the regular stuff, etc.), let them x-ray it again, just to pack everything back up after they found… nothing. Steffen, on the other hand, had the easiest check in his life – didn’t even bother to unpack his netbook. I’d say he looks way more suspicious than me, but of course they were afraid they can’t see through my clever poker face.

Anyway, we arrived in Fukuoka (where they checked – for the first time – if we were actually leaving the baggage claim with the right baggage), got our JR Rail Passes and took the next train to our new temporary home – or homes, since we both got our own rooms! Okay everyone, party is on in 505. Bring snacks and drinks, and we will party Gangnam Style (even outside of Korea) all night long!