Ah, Beijing. Hot, humid, dirty air that makes you wanna take a shower every hour. We actually didn’t miss that, less the grey buildings and trist scenery. But it was nice to be back at the City Walls Hostel. Hidden in the Hutongs it is really a refreshing sight, having a colorful atmosphere, nice mood and good coffee. At least good compared to the other stuff we had most of the time so far.

Since it was already late afternoon, we relaxed a bit and got ready for dinner. We met up with Helena and Carla and took a stroll around Qianhai lake. An area where people meet with several restaurants and bars. We walked around the lake, chatting, until we settled for a restarant the looked quite good. There we ordered different kinds of dishes, which all came at different times, so it was really a challenge to wait till everyone got their food. Especially Helena’s dish took forever and we were joking that they had to get the pineapples in to from Okinawa.

After dinner we went around the lake once more to search for good place for a few drinks. The bars seem to employ people who’s only purpose it is to point the by-passers to the fact they have a roof-garden. During our walk we encountered a group of people that seemed to enjoy some street musician. After getting closer, it occurred to us, that this wasn’t the ordinary street musician, but actually a small group of dancers, that animated people to join them. That was quite interesting, for they appeared to do standard dances to modern Chinese music.

Another thing they seemed to like around the lake are all things that make colorful light. Blinking shoes, headbands, toys and even kites were making the whole area a bit more colorful.

During our drinks we planned to explore the city together with the girls on the next day, but alas, one of them got sick, so when we said good night it was the last we saw the of them.

Not being bound by a common plan, we settled for some simple walks through the parks near our hostel, while searching for some geocaches. But we quit relatively early and headed back to the hotel. There we had some late lunch, coffee, arranged for a cab to fetch us and waited for the evening.

As someone mentioned along the way, we really seem to love trains. Well, actually we don’t care much, as long as it gets us to our destinations, but taking a train is often the best compromise of speed and price. So, to get from Beijing to Shanghai, we took a sleeper train. There are actually faster ways to get there, like a five hour bullet train. But then again, since we need to “waste” a few hours anyway, taking a sleeper, which is much cheaper and even saves us the accommodation for one night, seemed like quite a good option.

Good bye Hong Kong. It’s been a great stay, we will miss you.
Hello Beijing, be nice to us, even though we will only stay for a few days.

That just to sum up half of the day, where we flew to Beijing. We even got an upgrade to a better airline, since the one we originally booked, canceled the flight. And this is a sincere wish going out to British Airways. Please talk to Air China regarding food, you can learn so much. Best thing would be you to that before we fly back to Germany with you. Thanks in advance.

In Beijing we soon discovered a very characteristic thing of the city… smog.

And the area where the taxi driver dropped us wasn’t very reassuring, looked like the most rundown part of the city (at least we thought that it looked like that, not knowing anything else of Beijing). The hostel on the other hand was great. Really a nice place that made us feel like we truly were in China. Very helpful too, since the first things we got along with our room key were a map of the city, as well as a guide for some recommended day trips. I wish every hostel would do that.

Sitting at HKG, sipping coffee and waiting…. The next time we’ll be killing time like this at an airport will be at the end of our trip in Tokyo (for the rest of the trip we’ll be using taxis, trains and a ferry). 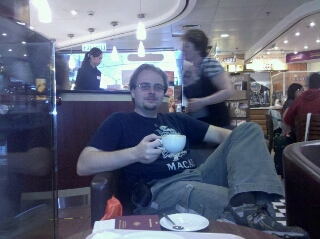